Marian and Bruce Langhus
Updating the 2018 Plans for Flood Mitigation 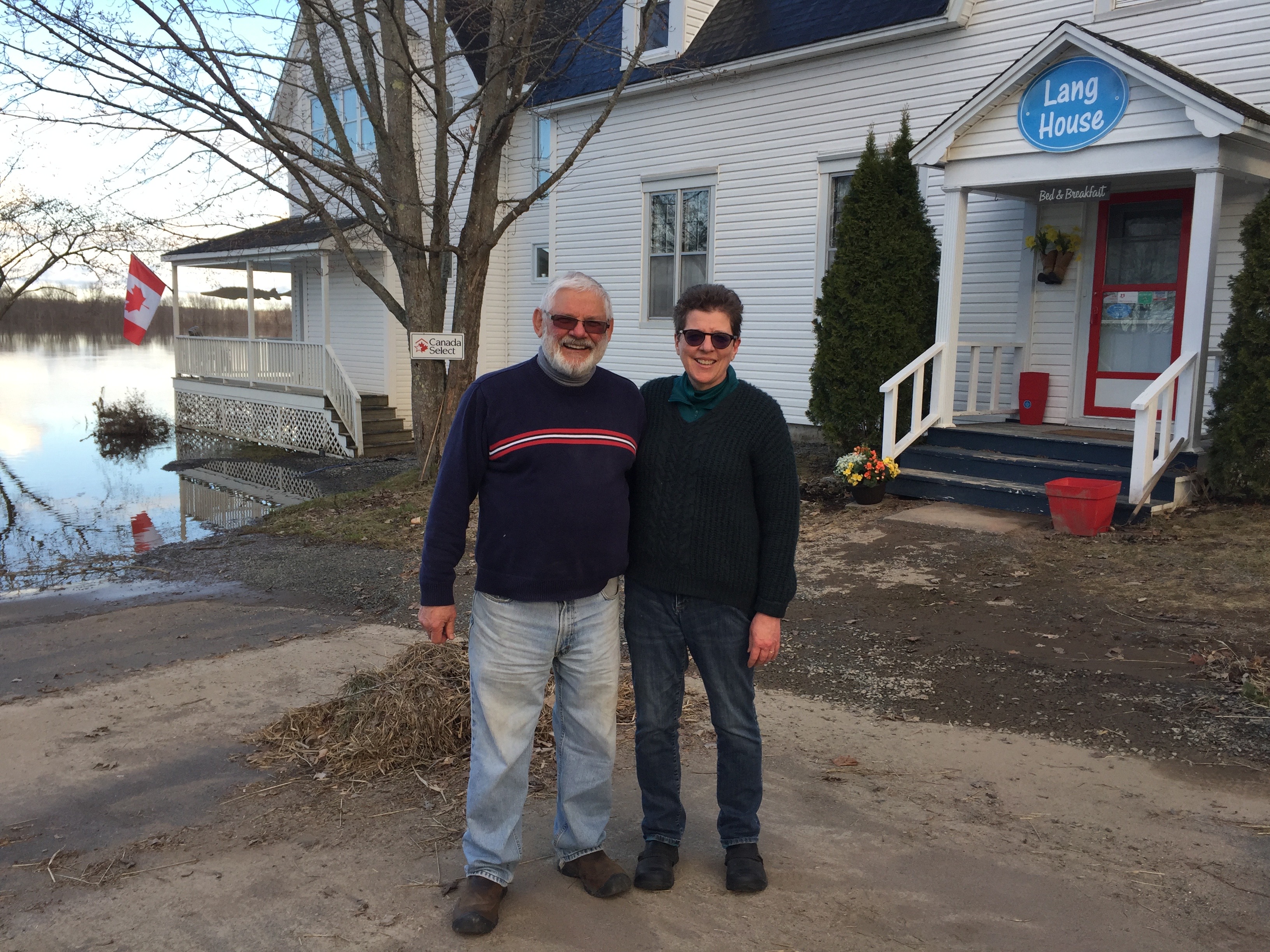 Bruce and Marian Langhus have adapted the philosophy of “Water In and Water Out – WiWo” instead of raising their BnB or entertain any barrier methods to prevent flood damage. The cost of repairing and remediating their home and business in 2018 approached $70,000. A few projects remain attain “WiWo” status (veranda, water pump, and, insulation.)

This blog will illustrate successful measures taken in 2018 and what remains to be done in 2019. It is our hope that others will benefit from our experiences and see that they too can live in the flood zone with the “WiWo” attitude of flood mitigation.

As a short background, Lang House is made up of two parts, the older part, closest to Front Street, was built in 1880 and had never flooded inside but it came close on all the the big floods. The front (facing the river) was built in 2008 to the standards of the time that being the 1973 flood (which was 6.4 m in Gagetown.) The maximum level of that flood was marked at the northeast corner of Lang House (see below.) The 2018 flood maximum was 6.8 m and the 2019 flood was 6.5m. 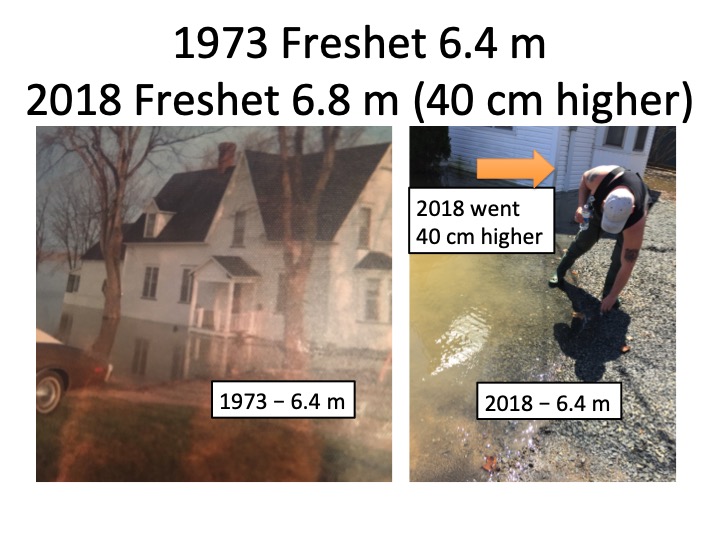 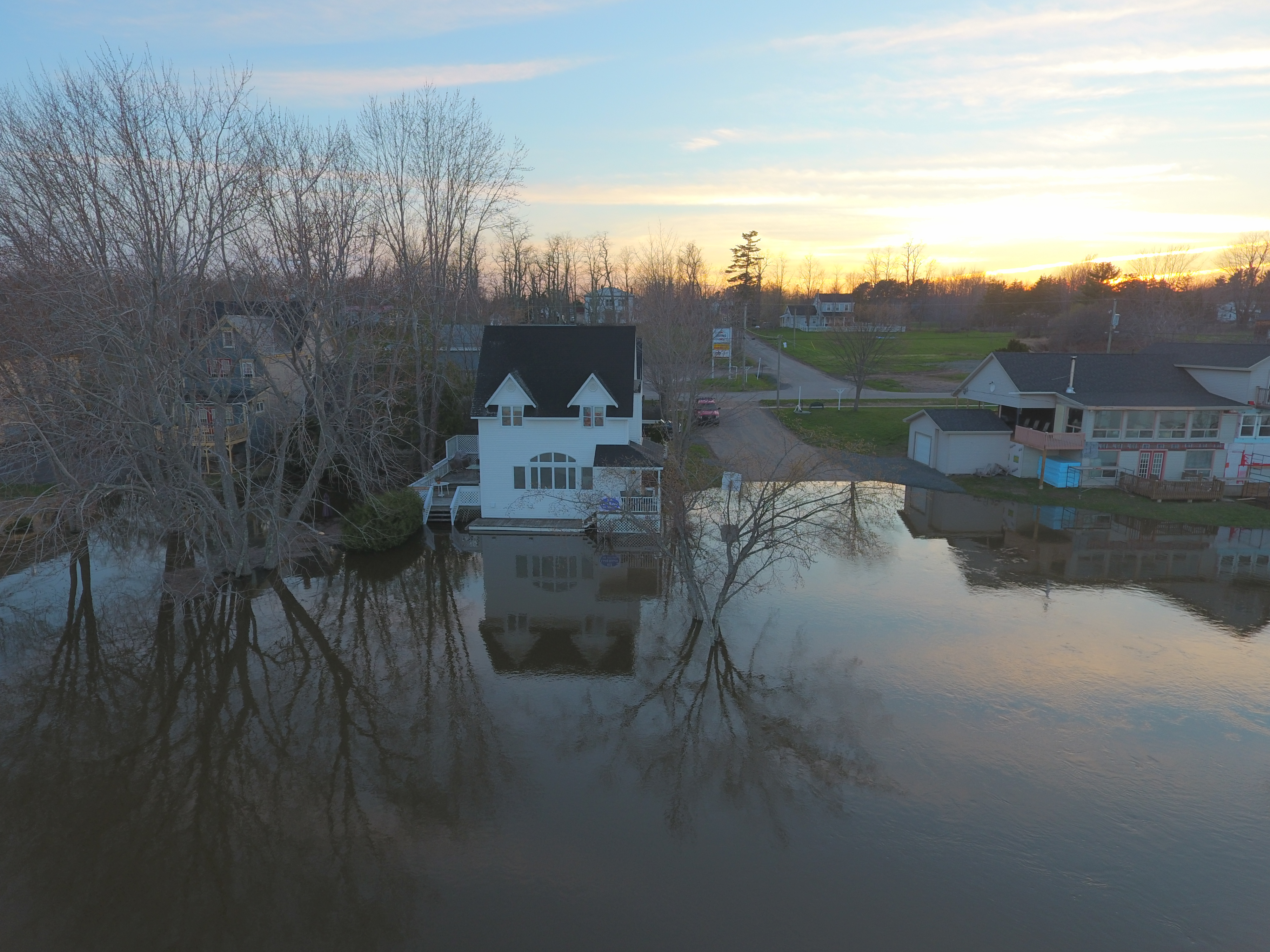 People seem to ignore that it is not only 2018 and 2019 that we had flooding but 2017 was also very high reaching a height of ___. The same heavy rains were experienced and we lost the veranda in front of Lang House shown in this drone shot by Derek Pleadwell. The height was around 5.2 m. We lost some items stored in the basement but not enough to convince us that we keep NOTHING in the basement in the flood season. We keep our dehumidifiers there in the non-flood season.

I would limit this blog to the choices that we made to adapt to living in the flood zone, the challenges, successes, and the ongoing challenges. I am going to leave the most horrific to last (the insulation.)

Electrical:
Bear in mind the early construction of Lang House has its own set of challenges. In 2018, about $10,000 worth of rewiring had to be done even though the electrical box and water heater had been moved up in previous years. Still rewiring had to be done. In the old wing we still had some floor plugs and they had to be replaced with higher outlets. In the front part of the house, where the water reached 21 inches high in 2018, all of the plugs were put high. Unfortunately, eight junction boxes remain in the basement and they will have to be drained and checked out by an electrician every year. We have to wait for the water in the basement to be drained before this work can be done.

Electric plugs put high in the living room where waters reached 21 inches in 2018.

The new water pump purchased in 2018 and pressure tank were covered with water and ruined. We elected to have a new submersible pump put in the well and a pressure tank installed in a kitchen cabinet. The added quiet from the pump is a dream!  We lost some cupboard space putting in the new pressure tank but to have it out of the basement without the worry of freezing proves to be an added benefit of flood mitigation.

We also lost a sophisticated water filtration system that we are only getting around to replacing this year. We had our water analyzed

Pressure tank and 2018 jet pump were fully flooded in 2019. Mitigation plan has submersible pump in the well and a pressure tank in the kitchen. 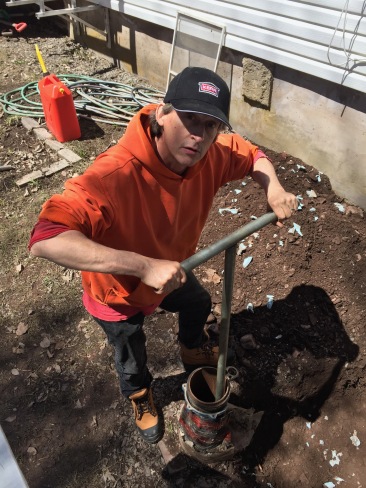 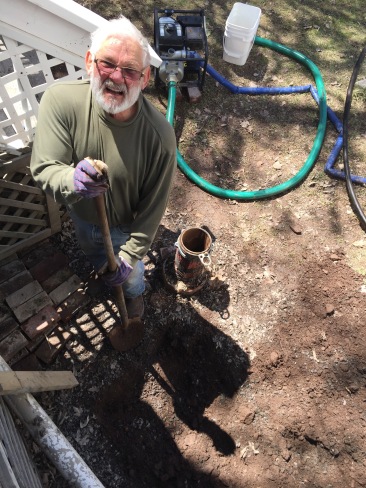 Digging up the well casing and pipes is not for the faint hearted but we had some strong folks!

Heating:
The large heat pump and air conditioning were a huge financial loss. Pair that with the ductwork (and the ductwork with the air exchange) and you are talking close to $20K. 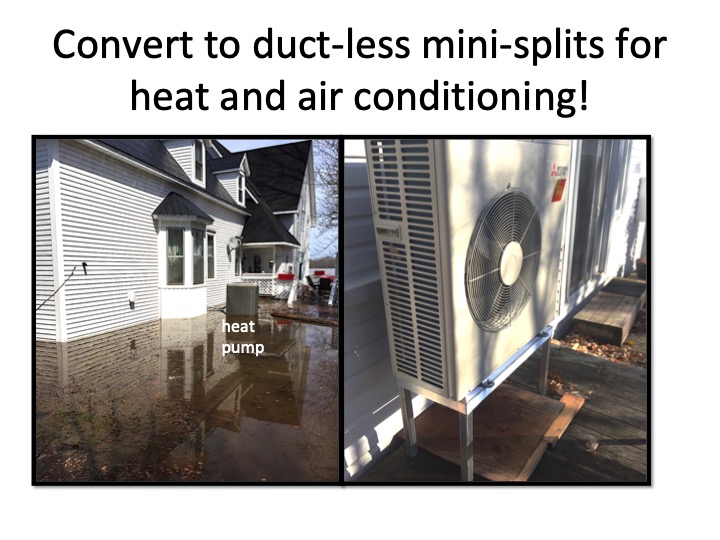 The three mini-splits that we employed to take place of the one large heat pump worked well but there were some modifications to our heating. The large unit did a great job in heating the kitchen and main floor space but not the lower front room. Heat rises and it does not sink into the sunken living room. We had to use the propane stove for heating there. 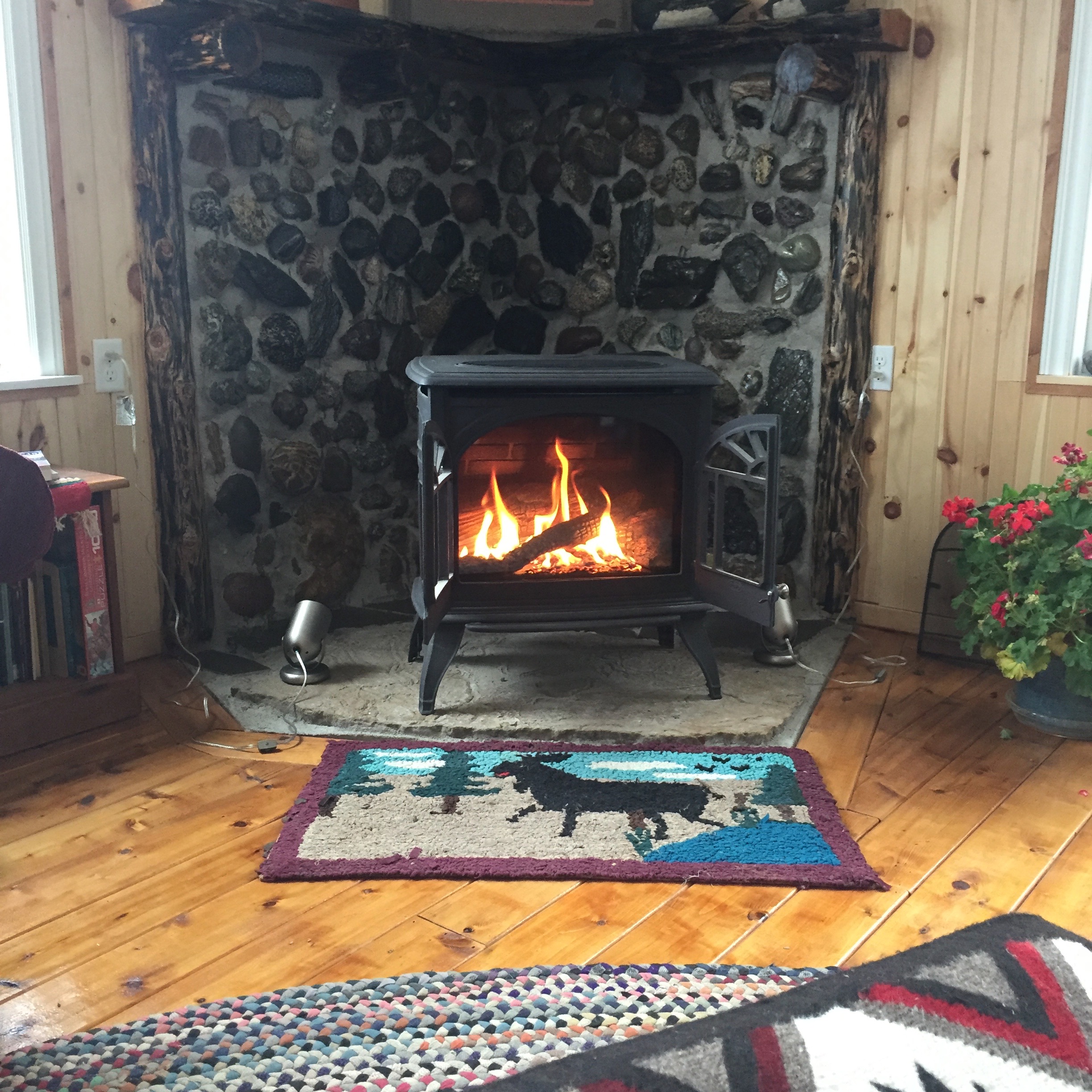 The duct work, although too inefficient to heat the front room, did in the past provide enough heat to keep the water pipes from freezing in the upper floor of the older part of the house. We had to keep that floor warm and it cost us hundreds. We are going to have a plumber add shut off valves and show us how to drain the pipes when that area is not in use. We are learning and it is costly but we are determined to get WiWo figured out for us.

We did not have to worry about our systems being flooded and that was great. But that takes us the veranda.

Lang House Outdoors:
Floods are an exercise in floatation and it is surprising what will float away. We have not lost a lot from the verandas. Other than the veranda piece in the front in 2017. It washed up on the Village Green and we gave it to them to use for a small stage.

We lost plastic lawn chairs and Bruce lost a cedar log that he was going to carve but our main concern is not loss of objects to the flood but the verandas floating upwards. In 2018 we lost a heat exchange unit on the south-facing veranda. It shot up in the air when the propane tank was taken off. The unit costs in the vicinity of $1000 and we barely escaped the floating veranda hitting it and destroying it this year. We are investigating using a screw piles system to anchor the veranda. This seems like a better solution to cutting off the corner of the veranda if it does rise up.

Floors and Walls – Choose Wood with a Glossy Finish
When we returned home after the 2019 flood, we found only some stubborn silt on the floor. No raised flooring, no bumpy walls, just the beautiful cedar and pine the way we left it. What a joy! Plus no dumpsters full to go to landfill!

The above photo of the corner with the high electrical sockets is the same corner shown on the left below. The flooring was an engineered hardwood that is damaged at the least bit of water and totally destroyed with the flood. The labour needed to strip the floor and put it outside and into a dumpster was horrendous. We had good help and were fortunate but we had to pay for the dumpster rental and renewal. 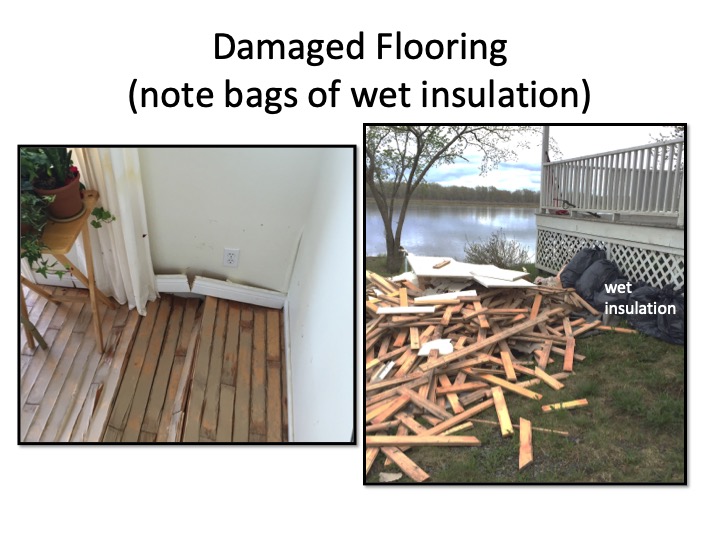 Note the bucking not only ruined the floor but broke the baseboards as well. The discarded wood is not even safe for burning because the coating could put off harmful fumes. 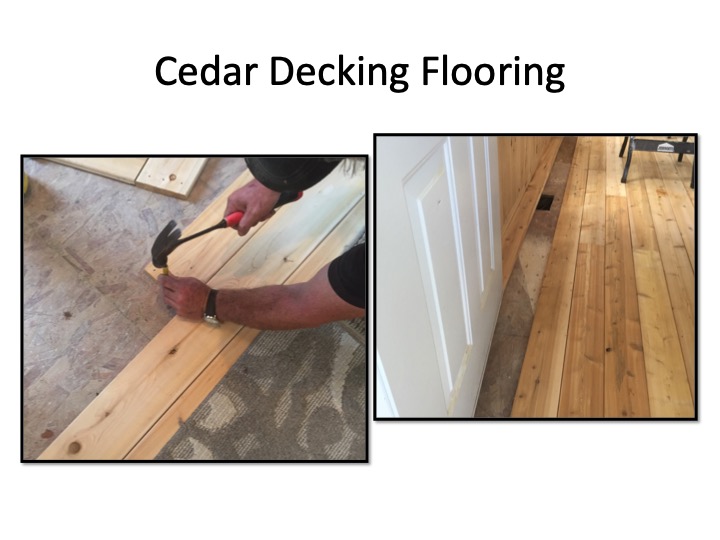 The choice of cedar decking was made because of its durability and resiliency to water. We chose a stain specifically made for cedar and the result is warm and inviting. 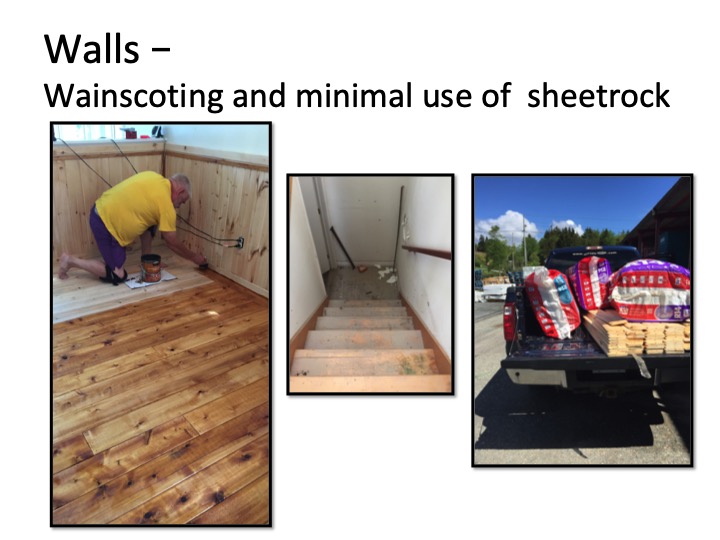 The wainscoting was made of pine with stained cedar trim. The wainscoting shed the water in the 2019 flood. We chose not to finish the stairwell and used just drywall. It has dried out with the help of a dehumidifier. The stairs, originally made of maple cracked some with exposure to the 2018 flood and were replaced with cedar decking like the floors.

Storage Space:
The most noticeable behavioral change that we have had to make is adjusting to the loss of storage space. We only keep our dehumidifiers in the basement during the non-flood season and otherwise it is empty. With the pump and pressure tank taken out, it is truly empty. We had to get rid of everything that we would normally put in there and that is an on-going challenge.

Major Appliances:
Living in the flood zone makes us aware of the value of everything, not just monetary value but convenience. Our new propane stove has the electronics in the upper part of the stove so it did not need to be moved up but the refrigerator and the dishwasher need to be put onto blocks if at all possible.  Our propane stove in the front room has all of the electronics in the bottom and if we had not had the stove disconnected and moved up, we would have lost our heat source in the living room.

Attitude:
Living in the flood zone and making preparations to “move up” every year takes a certain attitude and frame of mind. Starting in February I would think about when and how I would start to move all of our furniture and decor. When it came time I just did it like planned. Coming back to only cleaning the floors (which Bruce did) was enlightening compared to last year. I have said it was like coming back to mopping up versus tearing up.

BUT… Why did the water go out of the house so easily? The floor in the living room drained fast.

Looking in the basement was a disaster, all of my $4K plus new insulation was on the floor of the basement. 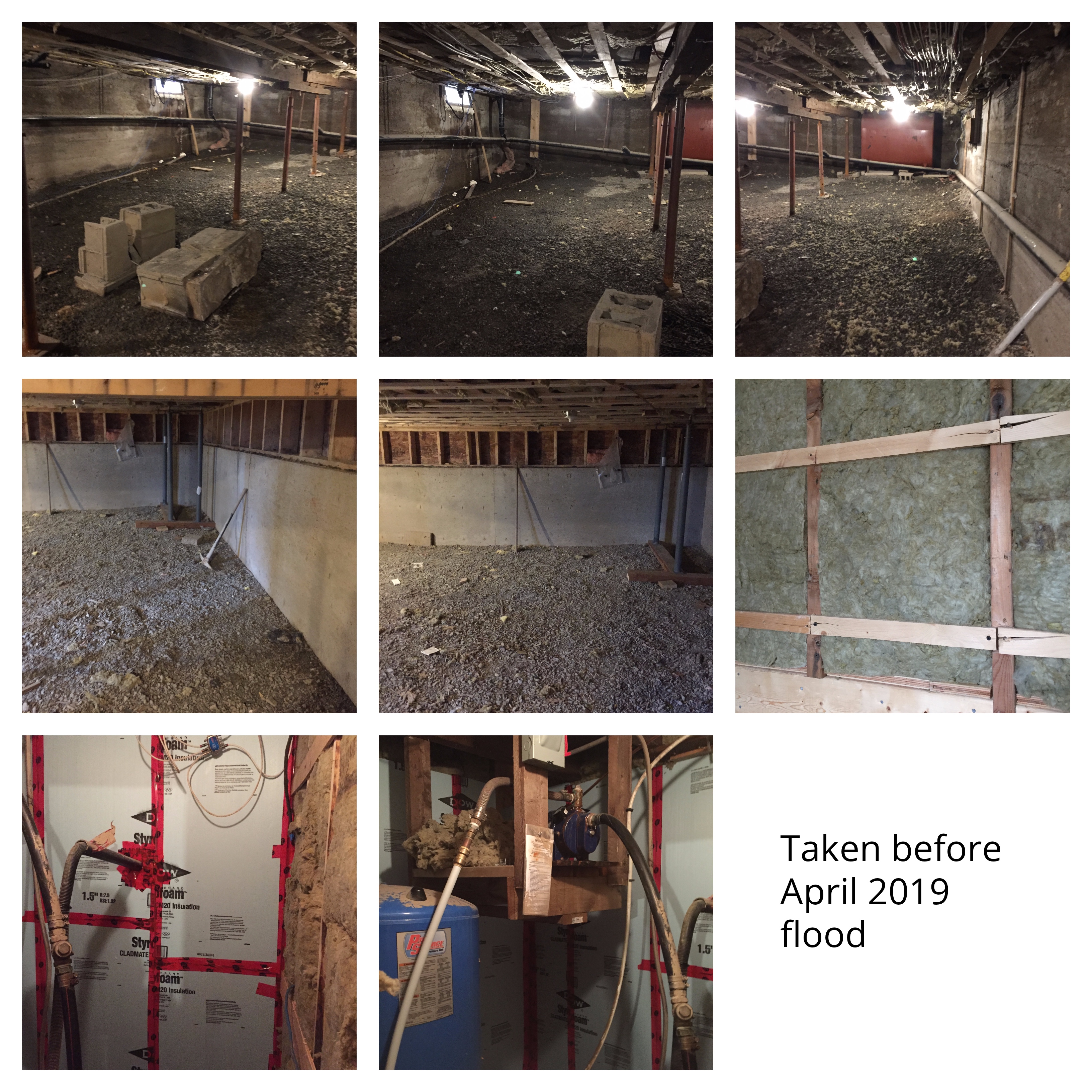 Before the flood all of the insulation is intact. 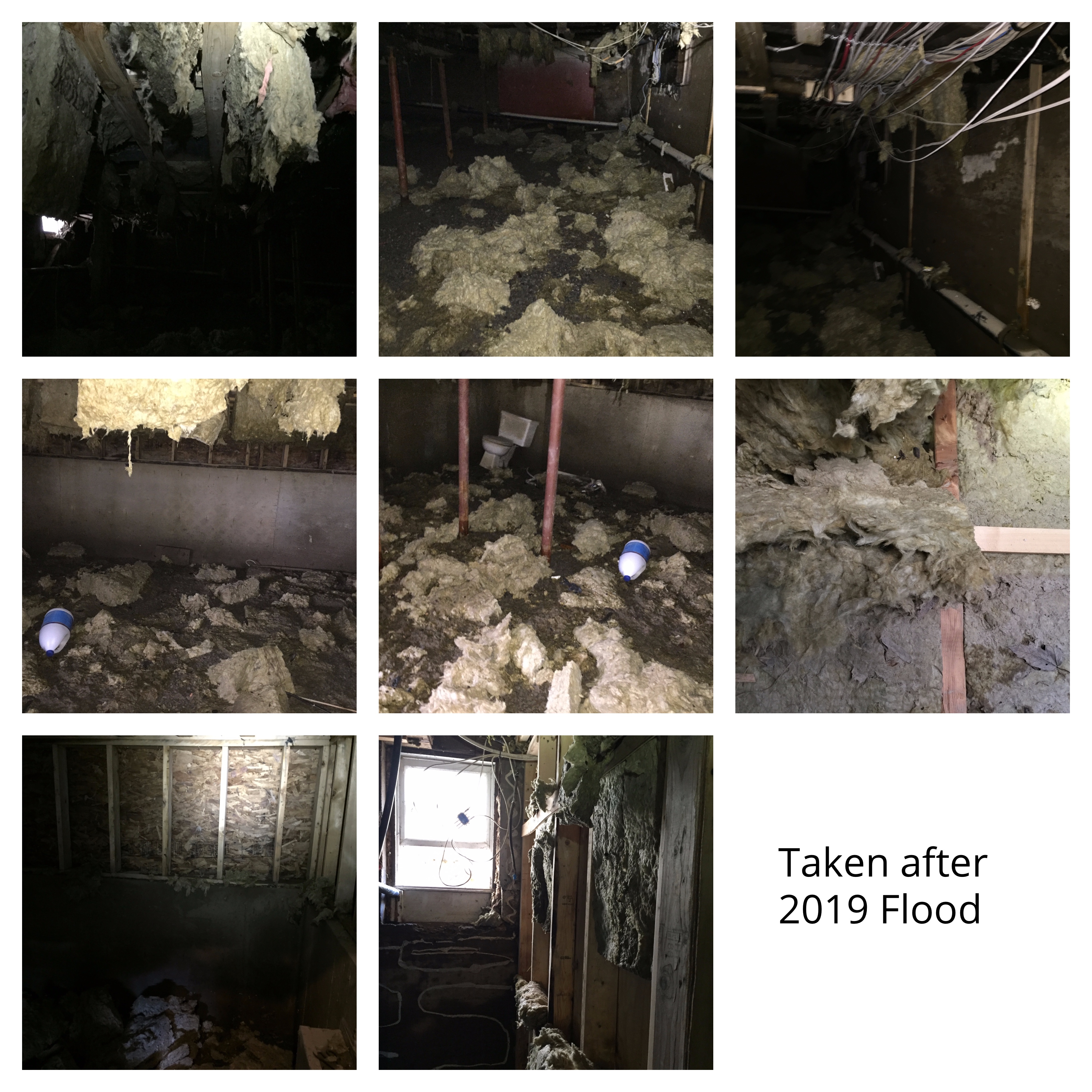 Before and after photos revealing the loss of insulation in the basement ceiling at Lang House.

How do we insulate the basement at Lang House. The floors are very cold without the insulation in May. What would we do in the winter?

Spray foam seems to be the answer but if we do the walls it is over $10K. Doing the floors are significantly less but is there a problem with the floors floating up when there is a flood and causing cracking to the house?

Living in the flood zone, Water In Water Out. A good idea that still needs some work.